Recent approaches contribute facilities to breathe life into metamodels, thus making behavioral models directly executable. Such facilities are particularly helpful to better utilize a model over the time dimension, e.g., for early validation and verification. However, when even a small change is made to the model, to the language definition (e.g., , semantic variation points), or to the external stimuli of an execution scenario, it remains difficult for a designer to grasp the impact of such a change on the resulting execution trace. This prevents accessible trade-off analysis and design-space exploration on behavioral models. In this paper, we propose a set of formally defined operators for analyzing execution traces. The operators include dynamic trace filtering, trace comparison with diff computation and visualization, and graph-based view extraction to analyze cycles. The operators are applied and validated on a demonstrative example that highlight their usefulness for the comprehension specific aspects of the underlying traces.

This page presents the application and the validation of the four operators and their approach presented in our submission to the 14th European Conference on Modelling Foundations and Applications (ECMFA 2018).

As explained in the paper, we implemented our approach as a tool provided inside the GEMOC Studio, an Eclipse-based language and modeling workbench to design executable DSLs and execute conforming models. The implementation of the State Machine DSL presented in the paper is available on Github, and can be used as an executable DSL in the GEMOC Studio.

Here is a screenshot of the GEMOC Studio when executing a State Machine model with trace construction and state graph visualization:

Now here is a sample of the graphical interface of the tool when comparing two State Machine execution traces:

From there, if we use the checkboxes to filter out the Region2 dimension using Filter and Reduce, we obtain this simplified trace:

In our submission, we motivated and illustrated the approach using an example based on simple UML State Machines with history states. Here, we will focus on a larger xDSML initially based on ThingML to validate the application of our tooling, through relatively small models but which can scale very easily (by just increasing the number of consumers or clients, see below) and with a behaviour that is difficult to predict or anticipate.

ThingML (for Thing Modeling Language) is a modeling language for describing distributed systems. It is used in embedded systems and is oriented towards the description of components (the things) and the way they communicate between each other. The models written in ThingML, through a text editor (standalone, or embedded in Eclipse thanks to Xtext), can be compiled to a large set of target platform like Arduino, C, C++, Java, Android, Javascript, etc.

As a small example of ThingML model, we can consider the following one:

This represents two things, one called PingServer and the other one PingClient, which can communicate by sending ping and pong messages through their own port both called ping_service linked together in the PingPongConfig configuration.

This PingPong model can be written in ThingML as follows:

First, we declare PingPongMsgs Thing which cannot be instantiated as it is declared fragment. We do that to reuse the message definition in the two following real Things.

Then we can declare the PingServer Thing, which reuse PingPongMsgs to be able to use ping and pong messages. It declares one Provided Port ping_service able to send pong and to receives ping Messages. Provided Port means that the service is offered by this Thing. If a Message is sent through this Port, every Thing connected to this Port will receive the Message.
The behaviour of the PingServer is declared in the main Statechart called here PingServerMachine. It starts with its Active States, just after having printed "Ping Server Started!\n". This State possesses only one Transition which is internal (Transition to itself) and has no name. This Transition is triggered by the reception of a ping Message on the ping_service Port. No guard will restrict the trigger. When firing this Transition, a pong Message will be sent through the ping_service Port.

The PingClient Thing also reuse PingPongMsgs. To work properly, the future instance will need to be connected to a Port through which they would receive pong and send ping.
Its behaviour, called PingClientMachine starts with the Ping State after having printed "Ping Client Started!\n". When entering the Ping State, it prints "Send Ping...", sends a ping Message on the ping_service Port, and then wait until a pong Message on the ping_service Port trigger the PONG Transition. When firing this Transition, it prints "Got Pong!\n" and jumps to the Stop state which is marked final, as no Transition start from it. When entering this State, it prints "Bye.\n".

As the original ThingML language is made to describe things that run concurrently in a fully-distributed way, we made some adaptations in the executable specification we provided in our Sequential xDSML Execution Semantics definition. Moreover, we only focused on a subset of the initial set of concepts of the semantics specification that was useful for our examples: 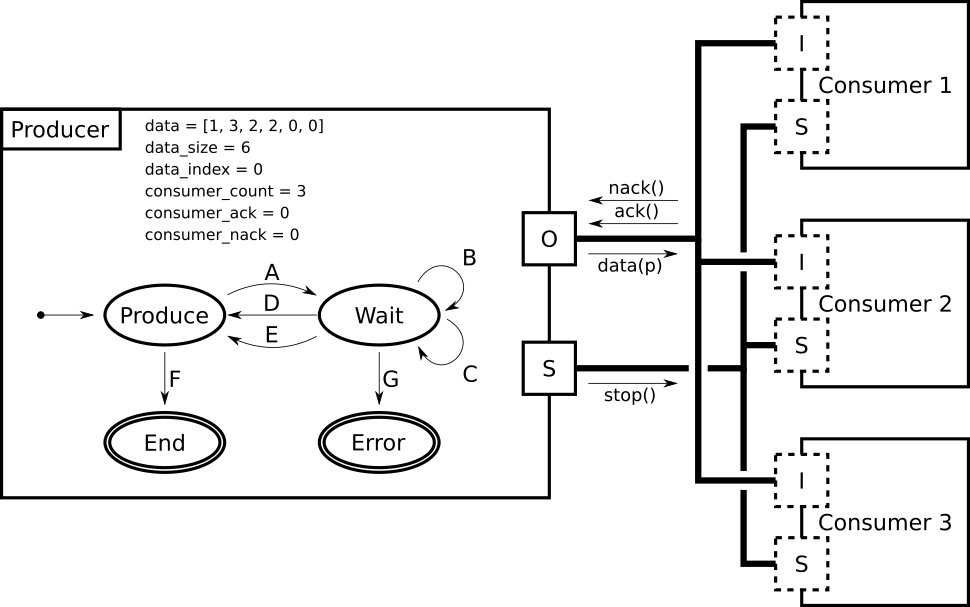 This model consists in one Producer that produces data, sends it through its output (O) port, and waits for the answer from the Consumers. The Consumers can only answer with an acknowledgement (ack) or not acknowledgement (nack). If at least one ack is received, the Producer returns in state Produce, otherwise it jumps in the Error state and the execution stops.
When all the data has been sent, the Producer goes in End state. Whenever it enters either in state End or Error, a stop message is sent to the Consumers through the synchronisation (S) port, and the execution stops.

The behaviour of the Producer, written with the concrete syntax, is the following:

The Consumers’ point of view of the model is the following:

The Consumers will stay in an Active state during the execution. They receive data from the Producer through their input (I) port, and react depending on the payload (p) transmitted. If they can evolve in their active state, then they will answer an ack message to the Producer, otherwise the outer transition will fire and they will answer an nack message.
At any moment, if they receive a stop message through their synchronisation (S) port, they jump to the their End state and the execution stops.

Written with the concrete syntax, the behaviour of the first Consumer is the following:

Step by step, the execution of this model proceeds as follows:

The full execution trace counts 47 states and each one contains 17 dynamic properties (if we only consider those which have at least one change during the execution), which is, even for this very little model, not really user-friendly to read.

Now that we have the subset of dimensions, we can reduce the trace by merging the states that are similar and neighboring together.

Some of the states that we obtained after filtering and reducing are similar but not next to each other. We can, thanks to the graph operator, observe what are the equivalences and how they interfere.

Just for comprehension, we put here the result of the computation of the equivalence classes.

The graph operator will produce a graph similar to the following one, we arrange it to better comprehend and interpret what happened during the execution.

Result of the graph operator applied on the filtered and reduced execution trace.

With this view, we can understand two things: